Skip to content
What Does it Cost to Worldschool?

What does it cost to worldschool? You may be surprised. In this video Worldschoolers share their budgets to show you what is possible!

Don’t you have to have lots of money? I wish I could do that, but we’re not rich. They must have so much money! I’d do that if I had lots of money in the bank!

These are common misconceptions that those new to Worldschooling think, but the truth is, Worldschooling can cost much less than what you are likely spending right now.

Think about it. What are you spending on rent/mortgage, electricity, home insurance, car payments, gas, utilities etc etc. Write them all down and add it up.

In this video, we ask experienced Worldschooling families to share their acutal budgets, so you can see exactly what real families are spending to be able to travel the world full time. Compare this to what you are spending to live an ordinary, stationary life!

How do they do it? Find out in this video!

When I first heard of the concept of Worldschooling and started looking into it and thinking about it, I thought, it’s too expensive, we can’t afford that. These people must have trust funds, or they inherited money, or they have a really good job, or they made money in the stock market. No, a lot of families, most families, they just work as they travel. They save really hard in normal life to be able to do this because the cost of living is so low when you’re traveling, you can do that.

Since we’ve been in Malaysia and Vietnam, over the course of the whole month, which includes our flights, which I spread the cost out over the period that we’re in the country, our visas, our accommodation, our food, our activities, and our travel insurance, each month has cost us the same as we were spending on rent in New Zealand, Yeah! That to me – it’s crazy.

I wouldn’t necessarily say that in New Zealand, we were living paycheck to paycheck, but we weren’t saving very much. We were mostly spending it because we wanted to have a nice life. We wanted to go to brunch or coffee and go for weekends away, and we wanted to save for a holiday. So we were putting all of our money into certain things, and there wasn’t that much money leftover that could go to long term savings, or to do anything else that we wanted. Whereas when traveling, we can potentially do that. Our goal is to match my husband’s income with our online work, between the two of us. I mean, if you had over $100,000 in Southeast Asia, you could do anything, go anywhere, be anything you want to be. It’s crazy.

The cost of living here is a lot less than it is back home, obviously, but the fact that that’s even possible is insane. I think that is a big block for people. I know it was for me. I thought all traveling is expensive because holidays are expensive. You go away for a week’s holiday, and you spend thousands of dollars. I have friends who’ve been $10,000 on a five day holiday for a family. But traveling as a lifestyle, even if it’s for a small period of time, is very different from traveling for a holiday.

I think that it’s a really massive block for people that it’s expensive, and it’s not! You can do it really cheap.

Leanne Heggie – Cake And Eat It 3

I can absolutely guarantee you, we have saved a fortune by being on the road.

I’ll tell you, traveling around the world was so much cheaper than living in one place in the San Francisco Bay area where the cost of living is super high. So it’s much less expensive. We were spending so much less money traveling.

We are the type of travelers who consider ourselves very adventurous, and we are very interested in getting into the culture and understanding it and immersing ourselves. We don’t need five-star hotels, by any stretch. That’s not what makes the adventure and travel for us exciting. So what kind of traveler you are also dictates, what type of budget you’re going to have to create for yourselves.

For $4-$5USD, we could feed our family of four really well with amazing food. You’re in heaven. It’s just fantastic.

We traveled to places where our dollar would go far, and that’s why I keep coming back to Southeast Asia. It was an amazing enriching experience, for so cheap.

It is way cheaper for us to travel than it is to live in New Zealand.

When you go to work, you’ve got to have clothes to wear to work; you’ve got to have makeup, the kids have expenses. Food is hugely expensive here in New Zealand. We have to have two vehicles because we need to get around the city. So all of those things totally add up. And it just amazed us really how much, or how little, we could survive on, particularly in places like Asia. But even Europe in some ways. There are parts of Europe that are really, really affordable and way more affordable than the life that we were living.

I just got to the point of making our budget work, and making it go further. I’ve worked remotely this last time around. That was kind of cool in a way because I was getting paid in New Zealand dollars, and then I was in Asia. So that was really good. So we’re quite fortunate to be able to do that.

We need a lot more money here in the States. It’s two or three times as expensive to live here as it is anywhere else in the world.

Traveling was cheaper, because of taxes and because of insurance and so many things. Everything is more expensive here.

The cost of living in the places we chose to become our home base is where costs were a lot lower.

Like Bali or Mexico, for example, we rented a house in Bali for $5,000 a YEAR! It was a three-bedroom house with a pool and a beautiful jungle view.

I mean food! You go to eat out at restaurants, and it’s two, three, four dollars a plate. For beautiful, amazing, gorgeous gourmet, organic, vegan, whatever food you want, from anywhere in the world. Whereas at home it’s $10-$15 per person.

We have come to the realization that It’s been cheaper traveling than staying in the States. We lived in Arizona, and it wasn’t the most expensive part of America.

If you add up all the money you spend a month it’s a lot. All the things cost. Our kids went to gymnastics and to dance and school, we didn’t pay for school, but still, you have all kinds of little things. The main thing is that you just spend money; because you’re in a country where you only spend money. You always want something more, and although when we moved from Italy, we thought we were not going to do this, and we’re not going to do that, we’re not those kinds of people, you end up being that kind of person because you’re bored. You have everything and don’t know what to do. So you go for a walk to Walmart or Target, and you end up coming home with bags full of stuff that you don’t need. So that’s a lot of money that we save because we travel.

We had a pretty nice Villa for $1,000 a month. That was accommodations, and everything was included.

And a lady comes, cleans it, four hours a day, helps you get whatever you need, water, and all that. Plus there was a pool, so that was great. You can’t get that for $4,000 in Las Vegas, probably most states in the US! And then the food is so inexpensive, it really is so expensive to feed a family of five. So that wasn’t a huge cost.

We had two scooters delivered to the villa when we first landed, we did 45 days and Chango, and the scooters for 45 days for two of them was 70 bucks, and it came out to like $1.50 a day.

So that was our transportation. So we just rode scooters everywhere.

Transportation, living expenses, food, and then it’s just money to do fun things. So whatever we were doing on top of that. Places for the kids to hang out or going out to eat, and $3000 max!

It all depends on what your comfort level is and how much you want to spend. Because if you want to spend $2000 a month you could, and people do. Some people spend $5000 a month, but for someone who says “Oh, I can’t afford it”. It’s more expensive to go to California for a week, than to live a month somewhere in Southeast Asia… two days in Disneyland will cost you as much as two weeks in Bali, including airfares, yeah, so it’s crazy!

Bobi & George Kaponay – At Home In The World Retreats

We traveled based on massively reducing our costs. So in Australia, we were living on over $150,000 worth of expenses a year. And we got it to under $30,000USD the first year and then even less to like $25,000USD per year for the next five or six years. That’s the way we lived. We actually lived on spending less than $25,000.

We sold our apartment, and certainly, we weren’t working, so we didn’t have income generation, but we had no expenses. It was so cheap. We realized the money that we made from selling our apartment, that was a cushion for us to feel comfortable traveling for seven months, and not being concerned about money.

We only pay for our accommodations and food, and moving around, so if you compare that to having a life back in that state, where I had all those other expenses, we live on a lot less now that we’re traveling full time.

If you’re going from country to country every two to three weeks, then yeah, it can definitely add up, but I think that if you’re willing to have a home base, it’s a way to stay in a place that’s really affordable as a family and then, take some trips out, every once in a while from there.

We’d like to say a special thank you to all of our Worldschooling families that contributed to this video! Please support them by visiting their websites and following their adventures.

Would you like to be part of a future video and share your knowledge and experiences? We’d love to feature you in an upcoming video. Click the button to find out more!

About the Author: Karen King

Karen King is an Aussie Worldschooling Mum of 2, who together with her husband, Cameron, began worldschooling in early 2016. 30+ countries later she created Worldschooling Central to support the community and help new families learn more. 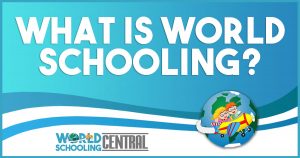 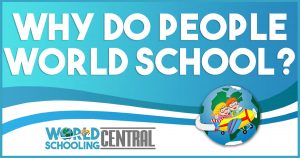 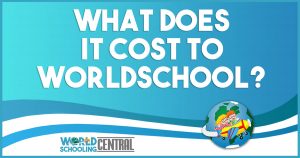 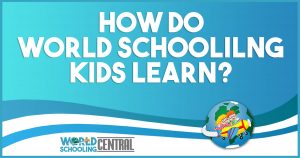 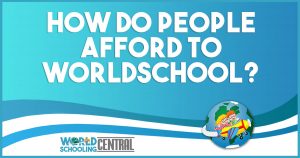 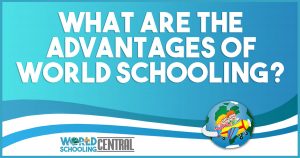 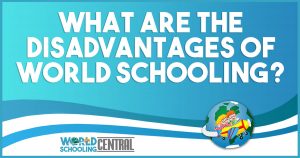 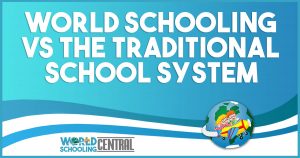 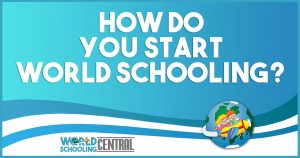 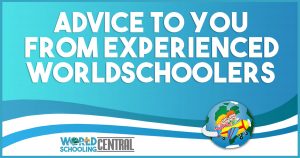 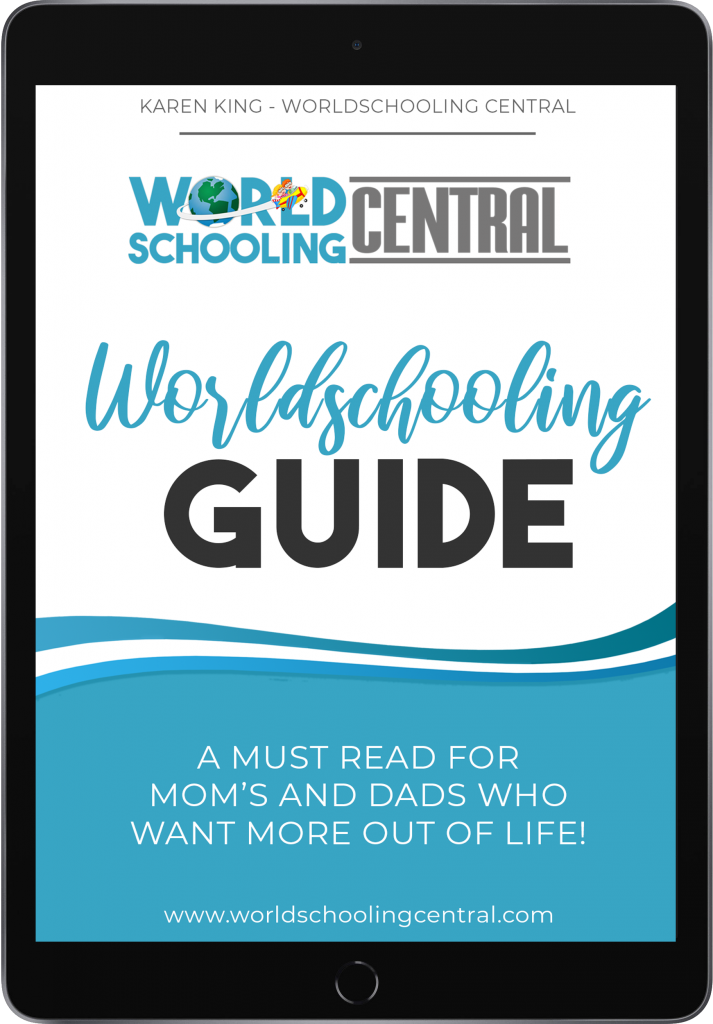 And receive a FREE copy of our World Schooling Quick Start Guide!